In my city, there is the emerald ash borer beetle: 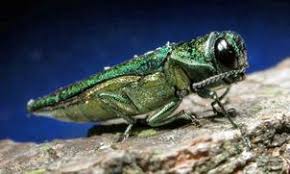 In my front yard there is was a large ash tree. As their name implies, emerald ash borers like to bore into ash trees. Once there, they lay their eggs. And the little buggers (pun intended) have found their way to our ash tree.

How do I know this?

Woody and his friends recently became very interested in our tree. As it turns out, woodpeckers love to eat the grubs of the emerald ash borer: 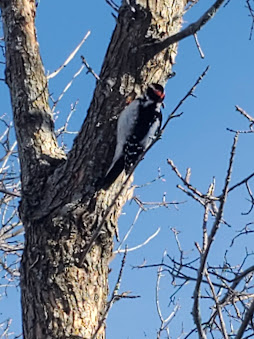 Not only do the resulting flying bark chips make a mess: 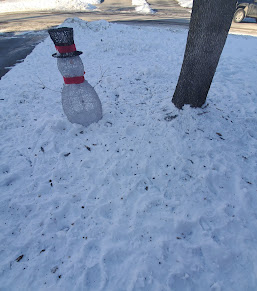 The beetles will eventually kill the tree. 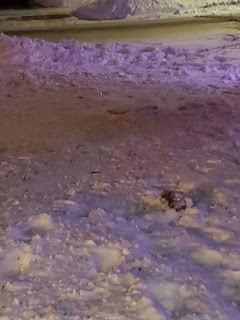 There’s no point in planting another ash tree for the beetles to find. Therefore, we’ll be replacing it with a less inviting (according to the beetles) autumn blaze maple tree. This was an easy decision. I love a colourful tree in the fall, which the autumn blaze is supposed to be.

It will be sometime before we have a full-grown colourful tree to enjoy. But my husband pointed out that this also means, for a while at least, birds won’t be able to perch on a branch overhanging our car and crap on it. So, there’s that.

Holiday Lines Are Blurry Around Here

How did I know it was time to take down the Christmas tree this year?

Well for one thing it was mid January, but since schools in Ontario were still closed there was no definitive end to the holiday season. And ever since we converted to a fake tree, the urgency to wrap up Christmas and remove the needle shedding ever-drying kindling from the living room just isn’t there.

The real sign that finally prompted me to get the decorations boxes from the garage and start packing up Christmas was Kiddo’s reversion to watching Halloween videos on YouTube. Just as I dislike the October overlap of Halloween and Christmas decorations in stores, there was something that felt wrong about listening to C’est L’Halloween under the glow of Christmas lights.

Kiddo’s insistence on revisiting all of his favorite Halloween songs in January had me convinced Halloween must be his favourite holiday. (He did inherit my sweet tooth, but it’s not like Christmas is lacking in sugar🤔). Well, no sooner was the Christmas tree gone than Kiddo was asking for me to play Jingle Bell Rock on my phone so he could dance around the kitchen to it. And just yesterday, while sitting on the couch playing with his tablet, he started singing Jingle Bells—the ‘Batman smells’ version, naturally (thank you, kindergarten).

I’ve clearly failed to properly explain (or enforce) the concept of seasonal music. I’ve also decided the light-up snowman in our front yard can stay until March…or until the snow melts, which might be longer. (At least I took down the blow-up Santa.)

Ice cream sandwiches are a common dessert item at our house--even in January. (Chocolate ice cream sandwiches, because there's no such thing as too much chocolate.) A week or so ago, after eating the top cookie off his sandwich and while licking through the ice cream inside, Kiddo looked at me and asked with absolute seriousness:

"Is there a place where people eat ice cream sandwiches every morning?"

Me: "Like for breakfast?" (For the record, this conversation occurred at suppertime.)

Sadly, I had to tell him there was no place where ice cream sandwiches are considered a standard breakfast food.

Then today, I came across what I personally consider to be the coolest science news item of the week:

Astronomers discover huge exoplanet has the density of cotton candy

Of course there must be many compositions that could result in the overall density of a planet being comparable to that of cotton candy. But then again, if it quacks like a duck... 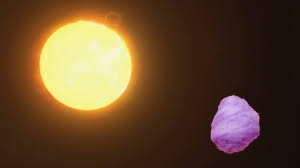 I think a cotton candy planet sounds like just the sort of place where people would eat ice cream sandwiches for breakfast every morning. I wonder if astronomers will discover it has a moon with the same density as chocolate chip cookies...way better than a moon made of cheese.

The Great Conjunction. Jupiter and Saturn form a line with Earth about every twenty years, but haven't gotten this close, and been visible in the night sky, for around 800 years. And it occurred on the winter solstice of 2020 no less. I bet there's a lot of significance being read into that.

I don't see any mysticism in this so-called 'Christmas star', but the rare event was cool to see. Unfortunately, we had clouds in my area on the 21st. This pic from my husband's phone was taken on the 22nd. 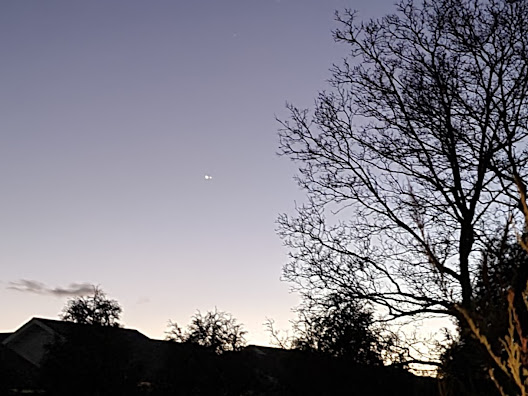 Kiddo was a little confused about why he was being dragged out to the cold back deck at supper time, but seemed moderately interested in the fact these stars were in fact planets. And I reminded him that he's now seen four planets in the sky. I brought him out to look at Mars when it was right next to the moon a few months ago, and have pointed out Venus to him before. Just in case he ever changes his mind about becoming a paleontologist-pilot-garbageman, I want him to know astronomy and cosmology are also valid career choices.

It's been an interesting few months. Kiddo's last day of school was March 13th. (Friday the 13th, in fact, but let's not read too much into that 😏) It's finally been made official that schools in Ontario (like pretty much everywhere else) won't be opening until September. Right around the time everyone is saying the second wave of COVID is going to hit, so we'll see how that goes.
It's hard to be optimistic about things, in no small part because I tend to be pessimistic by nature. But I'm working on it. I'm telling myself that Kiddo's school life won't be normal again until September 2022, when he starts grade one. Anything sooner will be a bonus. I wouldn't make a good kindergarten teacher. Kindergarten teachers are basically saints. I'm not. That said, I think my husband and I can manage teaching one kid to count, add  2 + 3 on his fingers, and hold a pencil properly.
I'm sad Kiddo is missing out on the social aspects of kindergarten, but with zero active cases of COVID in Kingston right now, there's hope the rules will relax enough for him to get some kid interaction over the summer.
My husband still has his paycheck. We're not worried about our bills. That makes us very lucky.
I'm still able to go for walks on the path around our neighbourhood. I'm starting to add short runs, which will eventually become longer runs. I'll at least be able to look back and say my fitness improved during this time.
I'm not big on signs, omens, and the like. Coincidences are coincidences, weather is weather. But on my walk last night I saw this and I've decided to take it as an excuse to be optimistic: 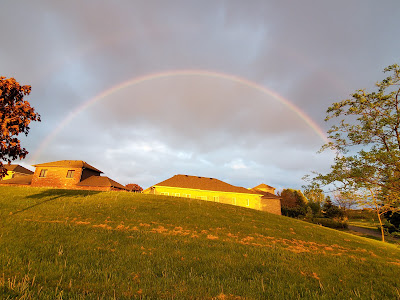 And, though it may feel like it, there is some evidence that the world isn't really cancelled: 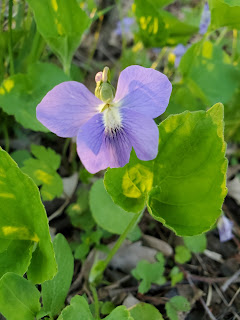 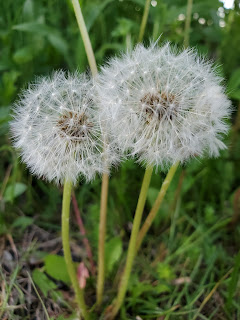 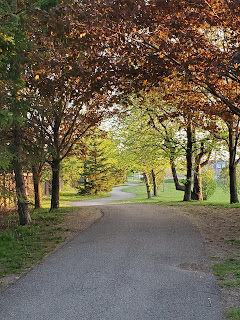 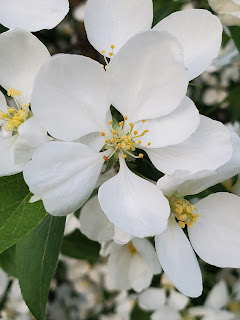 This is the park closest to my house. Locally known as the Spider Park: 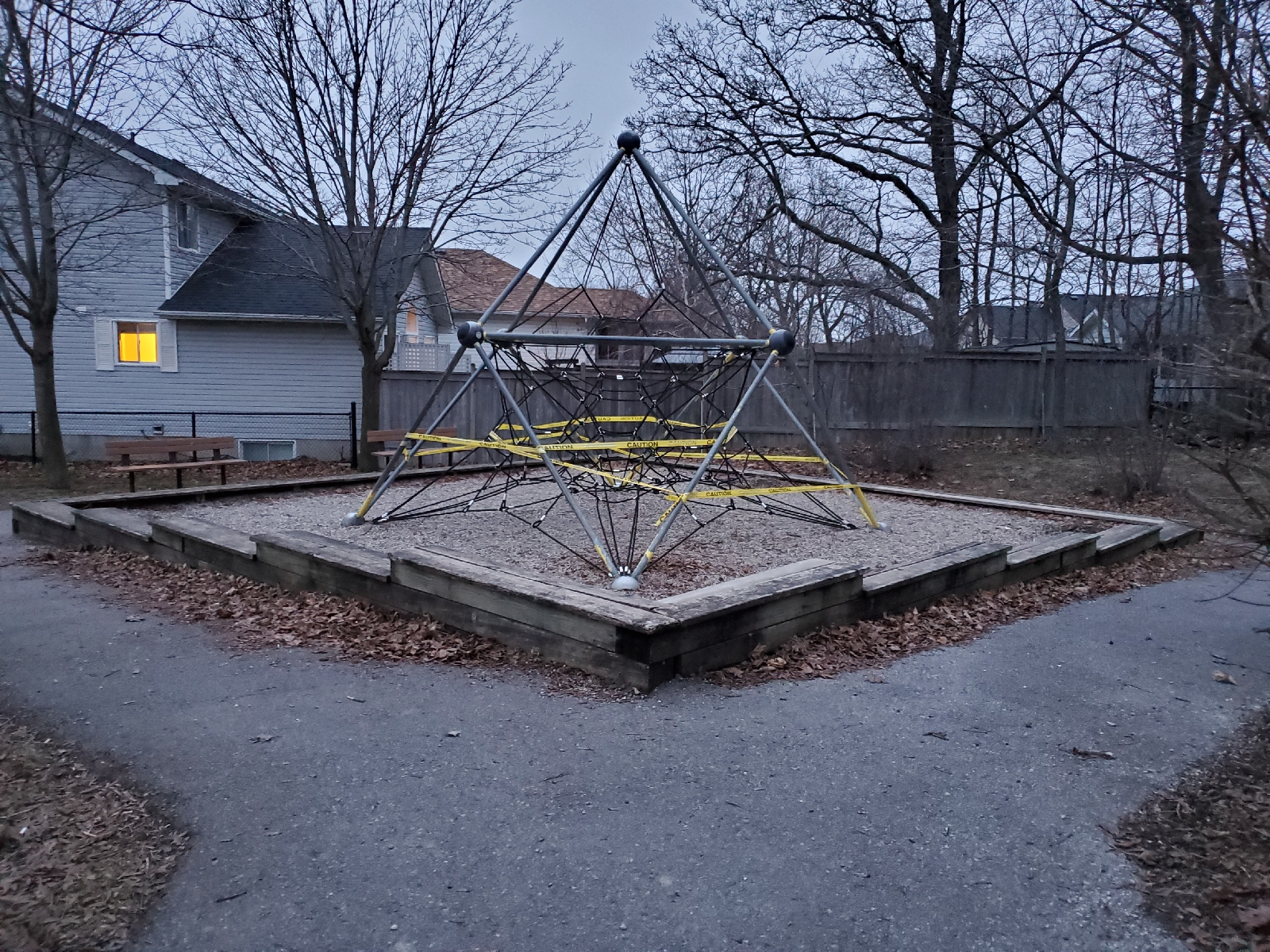 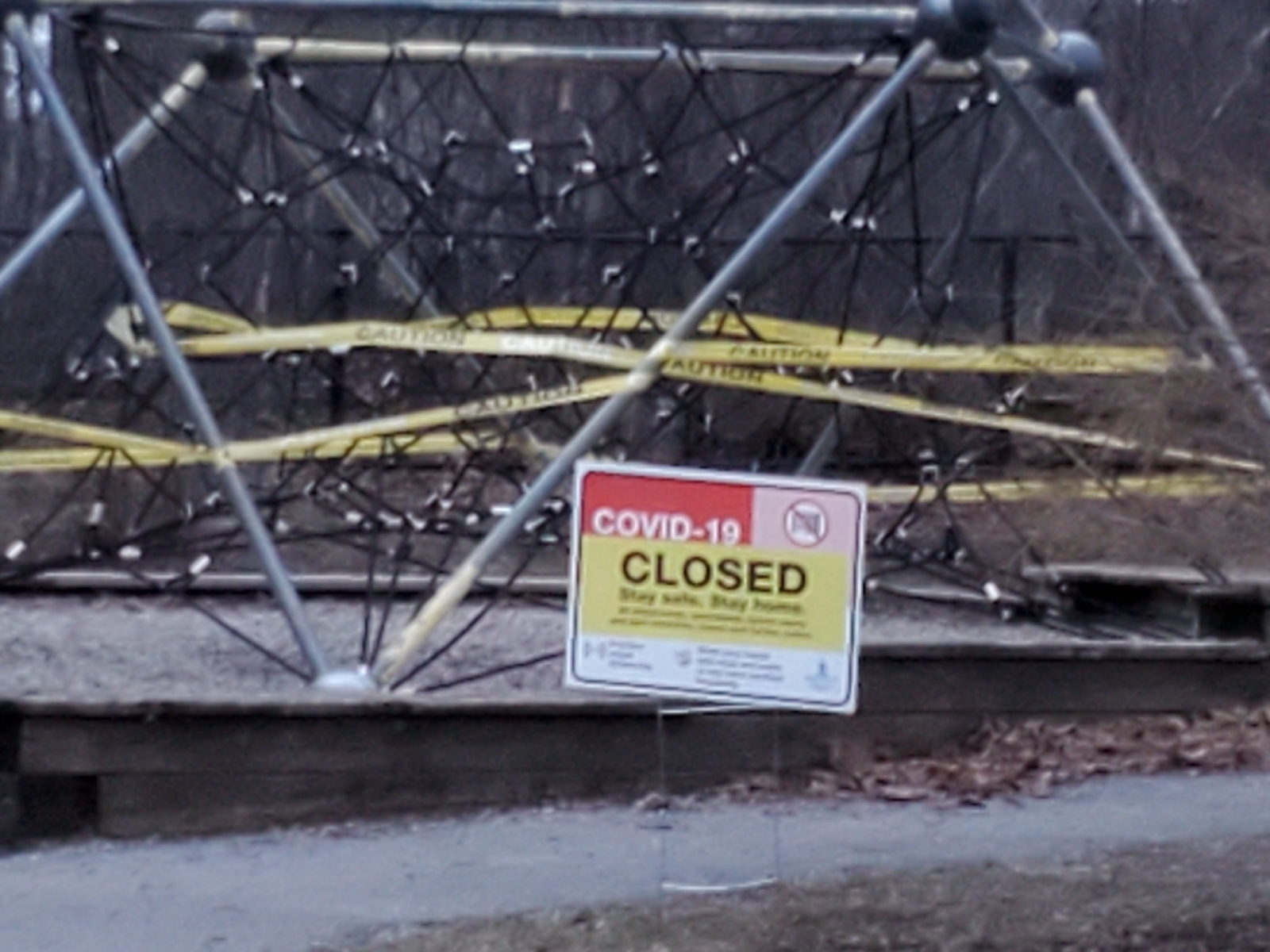 In the fall, this was a common stop on the walk home from school. Only a few weeks ago, I was looking forward to having this park, and the handful of others within walking distance, return to our regular routine.

On one hand, I'm glad the signs are up. It'll be good to have the simple visual when I have to explain to my four-year-old son why he can't play there right now. "Sorry, Kiddo. The sign says closed." But I've gotta say, it's a depressing sight. Especially as perfect park-going weather is starting to appear.
at March 28, 2020 No comments:

I found these pictures I took while on a walk back in the fall: 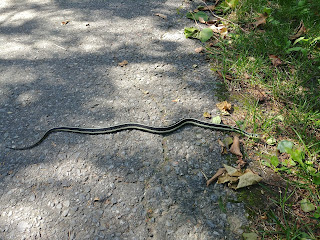 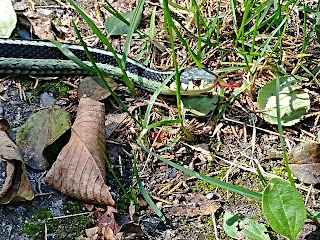 They made me think of a few things:

1) Back in September, I had no idea what life would look like in six months;

2) This snake, my cat, and basically the rest of nature are still business as usual;

3) I could really use a warm and sunny day outside;

4) At least I can still go for walks (as long as I and the other walkers veer as far away from each other as possible and don't cough).
at March 21, 2020 No comments: