I've got a few things on my writing to-do list right now: I'm working on a novel, I have a flash-fiction piece set aside for future editing before I decide where to submit it, and of course there's Letter From Your Girl, which requires tweaking, but as I mentioned yesterday I'm giving it a few days, maybe longer, for my maturity and professional detachment to kick back in after the critique I received set off all of my defensive alarms.  There was a time when I didn't take feedback personally...before I became a writer.

Anyway, I decided I should work on my novel.  It's been a few days since I've tackled it, and leaving it for too long can cause me to lose the flow. Problem, I've hit a little wall as far as what I think should happen next. There is no magic solution to this. Normally it's just a matter of sitting down and starting, and eventually something comes even if it's only a place holder until a better idea replaces it. This time when I sat down, I was overcome with a very persistent urge to go back to the beginning and edit what I've already written. My rationale being, by the time I finish doing that I'll know what I want to have happen next.

Sounds logical. The thing is, any site where you can find writing tips advises against this. They say 'write first, edit later' for the very simple, and true, reason that the write-edit-write-edit cycle can become an endless, inescapable loop. I know this. Still, half of my brain wanted to progress the story, the other half wanted to edit.

The tug-of-war came out a tie. Result: neither story progression nor editing occurred. I wondered over to youtube for a while, played my guitar a little--yes my life is very tough these days--made some lunch. And, of course, played with the cats: 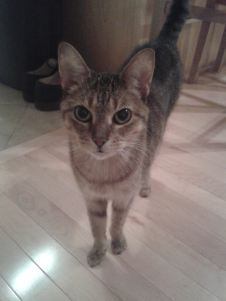 The curser on the page didn't budge.

Finally, in danger of wasting the entire day, I gave up on the novel and abandoned the official to-do list all together. Instead, I went to my unfinished-stories folder and picked out another piece I had started a while ago, but abandoned, and managed to move that story forward by a few hundred words. Not much, and I have no plans for what I'll do with it when it's finished, but some writing got done and that makes for a good day.
at October 30, 2013

Email ThisBlogThis!Share to TwitterShare to FacebookShare to Pinterest
Labels: Writing