Yet another baby-free time window spent reading blogs...and ignoring the imploring eyes of my neglected cats.

Have I mentioned before that SciBabe is awesome? I can't remember if I've blogged about her before, and I'm too lazy to check my archives. Either way, I can make a lot of time disappear reading her blog.

To quote SciBabe: "Atheism...It’s my religion like not skateboarding on Tuesdays is my sport."

Stephen Fry expressed a similar sentiment (paraphrasing from a Craig Ferguson interview): If someone who doesn't believe in the Tooth Fairy were called a Floppist, I would be a Floppist. But I have no desire to spread floppism.

I agree with this: 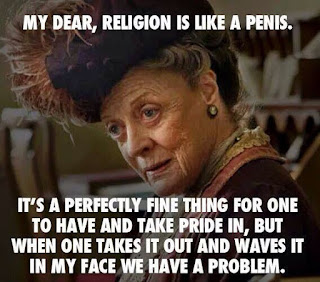 If you are a Floppist, we can still be friends. Don't get me wrong, I will think your floppism is weird and wonder what unusual childhood experience could result in your being a Floppist (past the age of six), but as long as you're a nice, empathetic person who's not hurting anyone, and good company in general, I'll get over it. Because I also agree with this: 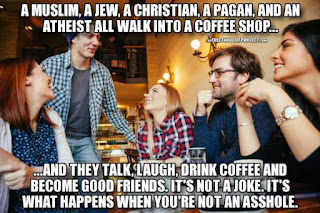 There is a disturbing lack of critical thinking skills in the world, even among the most educated of people, and religion is a big reason why. Religion, i.e. the belief in something not only when it can't be observed, measured, or reproduced, but also in the face of observable, measurable, and reproducible evidence to the contrary.

This lack of critical thinking does cause harm. SciBabe (because she's awesome) explains this well in her post When Education is not Enough. To save you some of the suspense, GMO's aren't evil (nor as common as you might think they are), there's no government conspiracy to poison you, and for every useful source of information you'll find through Google, you will have to wade through and recognize--hence the need for critical thinking--fifty that are bullshit. Be careful.

If you can maintain a belief in a god without losing your ability to ask hard questions (and accept unexpected/unwanted answers) then power to ya. But, I wonder how much sooner humanity might have figured out things like, say, thunder and lightning, if only time wasn't wasted believing it came from Thor's hammer and that was answer enough? When 'belief' becomes a placeholder for all that we don't understand yet, it will be that much longer before we understand.

Although, I must say, I don't care that Superman's attempt to turn back time would have killed all life on Earth, or that Cinderella's glass slipper would have shattered (some physicists might have too much time on their hands). There is a time to suspend your disbelief. Stories, no matter how absurd, are fine. As long as we admit they are stories. Exercising the imagination is good. After all, someone had to daydream about being able to fly before airplanes could be invented.
at December 30, 2015