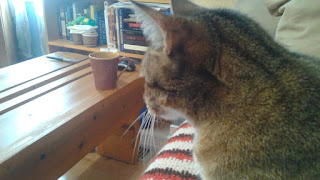 who is refusing to look at the camera after being kicked off my lap/keyboard about half a dozen times. She's probably reconsidering whether I'm still her favorite human, but I keep the food dish full, so I feel secure in my position.

Hmmm, something will come to me...

Spit-up? No...isn't that supposed to dial back with the introduction of solid food? Cause so far—

Wait! Stop. Not writing about spit-up...

Diapers? Definitely not (worried you there for a second, didn't I?). 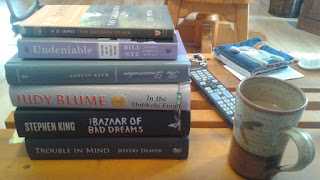 Periodically, I wholeheartedly volunteer to go get groceries in the evening while Hubby is on baby duty. And, well, Chapters just happens to be right next to the grocery store (crazy coincidence).  Since Kiddo's arrival five short months ago,  I have added the following to my bookshelf—already packed with unread volumes:

Trouble in Mind: A collection of short stories by Jeffery Deaver. I've read one story so far; it didn't blow me away. Maybe more on that in a later post. If I remember, which is unlikely. Never mind.

The Bazaar of Bad Dreams: Also a short-story collection, this one by Stephen King. I'm on page 22, still near the beginning of the first story (the first seven pages were the author intro).

I picked short-story collections thinking I might have a snowball's chance in hell of finishing a complete story in a reasonable amount of time, maybe even one sitting. Turns out both Jeff and Steve consider 15000+ words to be 'short'. I personally think this is getting into novella territory (or novellette?). According to Writer's Digest anything under 30k can be called a short story (really?). Maybe it's just that the length of my 'one sitting' has changed dramatically in recent months, but I think that's ridiculous.

In the Unlikely Event: One of Judy Blume's for-adults novels. I haven't read any of her adult stuff, but I've been told it's great by number of people. Including the Chapters employee who was at the checkout when I bought this one. You know how they say, 'Whatever you do, do it well'? I swear every time I've been checked out by this guy he has something relevant to say about the book or the author. I'm starting to wonder if there's a book in Chapters he hasn't read.

I chose this one in particular (and broke my don't-by-hardcover-unless-it's-on-sale rule, but it's ok I had a gift card) partly because the description mentions air disasters of the 50s—three crashes hitting one town. I wondered if one of them was a Comet, early jets of the same time frame that exploded in midair because of square windows. I haven't cracked this book yet, but I googled the event that apparently inspired it. Turns out the referenced plane crashes predate the Comet crashes by a couple of years. Boy, the 50s were a crappy decade for air travel.

The Dressmaker: Historical fiction by Kate Alcott, a new author for me. I didn't actually buy this one. My mom recommend and lent it. I've made it to page 10, so I'm not really into the story yet but I think it has potential. (Did you notice the upside-down title in my picture? I did, but I'm not taking another one. Baby's napping, seconds count)

Undeniable: Evolution and the Science of Creation: By Bill Nye, chosen because I like Bill Nye. I usually prefer my science-ish books a little more in depth, but I don't have a lot of spare brain power these days. The Science Guy's layman-level writing is just about right for my current non-fiction needs. I've read a whopping eighty-eight pages of this one so far.

The Children of Men: This one is by P.D. James and I bought it because for someone who writes sci fi, it's been a while since I've read any. Also I haven't read any of her books, but I've heard good things and was looking for something new. I haven't started this one yet either, but according to the back cover society's collapse is about six years away.

So there you have it, my unfulfilled reading expectations. Oh, in the background there is also The Lamb Book from IKEA's extra-soft, baby-gums-friendly collection. I've 'read' that one quite a few times and highly recommend it to the 0-12 month crowd.
at January 17, 2016