Is This Really A Thing??

It’s hard to venture into the internet world these days without coming across lots about traditional Chinese medicine (or TCM, cause you’re not important until you have an acronym). Acupuncture, qi, herbal medicine, etc. Then there’s the cure-all-ills-through-food ‘wisdom’ that smacks you in face everywhere you look.

But the first time I ever heard tell of cupping, it was on an episode of Supernatural called The Purge. In short, people think they are losing weight thanks to cupping when, in fact, they are being slowly consumed by fat sucking monsters. 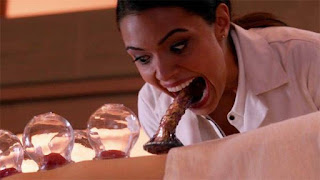 When I saw this, I seriously thought the writers of the show made up cupping to make fun of all the weird things people are willing to do to themselves—or pay to have done to them—in the name of ‘wellness’.

They didn't make it up.

I can understand how people easily get sucked down the rabbit hole when desperate to lose weight, relieve a chronic symptom, or cure a serious illness. I’m embarrassed to say, I’ve wandered a little close to the hole myself once or twice and taken a good look—then run in the other direction.

But suction cups applied with enough force to cause pain and bruises? Seriously? Why not just get a massage? At least that feels good. It would be cool if hickeys really did have healing power, but who are we kidding?

Michael Phelps, apparently. And there are a few doctors (the real kind) out there who have some things to say about it:

I don’t know whether reality is stranger than fiction, but it certainly gives it a run for its money.
at August 10, 2016