1) My cat is judging my parenting skills

Kiddo is getting pretty good at 'gently' petting that cats. Ok it's more of a whack, but he is learning that they don't like the fur grabbing thing. Unfortunately, sometimes that grabby impulse is pretty strong: 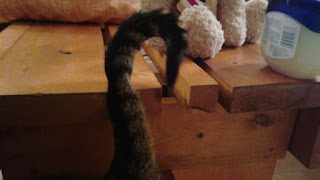 After the inevitable hiss, it isn't the baby who gets the stink eye. It's me. I hear her thoughts bore into my brain: Control your offspring, human.

There was a time when the baby didn't recognize those dark-brown squares as food items. He has now figured out that if I'm eating it, he can too. And wants to. Since the chocolate I was eating was 70% cocoa, I assumed it would be too bitter for his taste. I'd give him a piece, he'd hate it. I would continue to munch chocolate without tiny hands trying to nab it.

I handed over a crumb. He put it in his mouth. A moment of contemplation...

Chocolate will now be consumed in secret.

You've probably heard this one before. It started in the shower. Baby asleep, time to myself, all is right with the world. I open my eyes, and there it is. A big, wiggly spider drifting down to the top of the shower curtain.

Freeze. Consider screaming for husband to come to the rescue. No. It's just a spider. Spiders are good, they eat mosquitoes. Keep showering, everything is fine. Keep showering. Sneak a peek at spider.

Gasp. Where did it go?

There! Spindly, translucent-orange legs appear over the top of the curtain bar... crawling my way, barely hanging on to the condensation-covered bar.

Unhook removable shower head, edge to other side of shower.

I could spray it, maybe wash it down the drain...

Hmm, too many folds in the curtain for it to fall into and vanish, still wiggling.

Options: A) Never use shower again. There's always sponge baths, and we might be moving soon anyway. B) Husband is still within screaming distance.

Option C it is:

Insects don't really bother me that much when I'm (and they are) outdoors. There's just something about sharing the shower with crawly creatures that isn't cool with me.
at August 26, 2016