We’ve lived in our current house since September. In the nine months since then, we’ve mostly unpacked (the garage doesn’t count, right?), but decorating has been another matter. So far, the only items adorning the walls are a calendar in the kitchen, a mirror left behind by the previous owners—conveniently over chips in the paint—and a TV mount we have no use for. Even if we did have use for it, it’s current home in the dining area doesn’t work for me.

So, the TV mount has to go, decorative as it is: 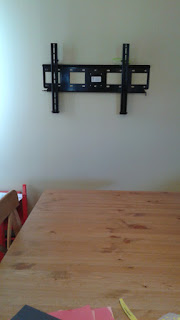 As for the mirror, it’ll probably go too, but there is part of me wondering whether I would like it better if I took the time to refinish it, maybe in white? 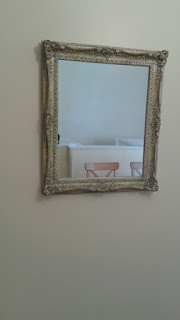 I’m also wondering about the odds of me ever getting around to refinishing it. Slim, I think. Either way, it doesn't look good where it is in the middle of the dining room. Then there’s the question of why I haven’t hung anything of ours on the walls, except the calendar.

I’m not a huge fan of the multiple shades of beige that make up this house. Especially the two shades in the living/dining room: 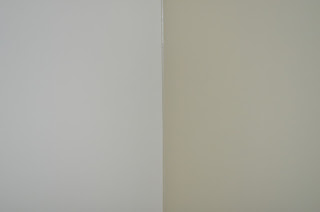 This is not a trick of the light. An interior decorator I am not, but surely I can do better than this. That mint-green in the bathroom could be improved upon too. And the off-white in my den was probably done by the builder. Do I like that bluish colour in the bedroom…

Ok, so priority one is to unpack. Priority two is to paint. I wouldn’t want to put pictures up only to take them all down again when I paint. That would be silly. Especially if I’m going to paint soon, which of course I am. Maybe in a month or so…

October…November…December…maybe over the Christmas holiday?

We narrowly dodged the bullet of having to move within a year of buying this place, but there is still a reasonable chance we will be moving a year from now. This has put a damper on my decorating enthusiasm. However, there is also a good chance we will not move in a year. At which point we will have lived here for almost two years, in multi-beige, empty-wall land.

Step one: find a colour that works for almost all of the upper lever (semi-open design makes this the most logical approach), that I won’t get tired of looking at, neutral enough that I won’t panic if we have to put the house on the market in six months, but not beige.

Not blue, we had that in our last house. It's time for something new.

Not yellow. I like yellow, but too much yellow can be worse than too much beige.

Green? In my experience (3 homes ago) finding the right hue us tricky. The right green is awesome. The wrong green is horrible.

When we were house hunting we saw some houses with grey as their main interior colour. Each time we liked it, even different shades. Grey it is.

But there are so many greys. It's hard to get an accurate picture of paint cards, but I've narrowed it down to these: 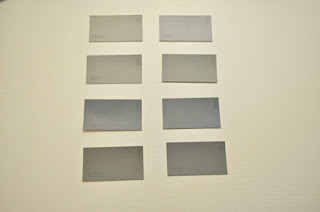 On first impressions I love the darker shades on the bottom. I can imagine a brightly-coloured, or even white, picture frame against a saturated-grey backdrop and I love it. Unfortunately, our main living area isn't huge and it doesn't get much natural light. Dark is not a safe bet. I don't want feel like I'm living in a dungeon. And I really don’t want to do this twice.

Step two: Given the difficulty in imagining what a colour will look like based on a tiny square, and the overall surface area I plan to cover with this colour (therefore the effort that would go into fixing a mistake in colour choice) I will be investing in sample cans of paint for the first time.