When Kiddo's first Halloween rolled around he was barely 2 1/2 months old. I didn't want to spend $30 on a costume he might wear for all of twenty minutes. If it weren't for the baby costume included in a stash of secondhand baby clothes we'd received, a dragon (or dinosaur?), we might not have acknowledged the holiday at all. But we had the costume so I figured we might as well put it on him and take a picture.

My visiting parents were even thoughtful enough to bring a costume for me (amazing they could predict I would not have bothered to come up with one). I think we managed to snap two or three pictures before there were tears, but at least Kiddo's first Halloween was recorded. We also handed out candy of course, but there was no jack-o-lantern or any other decorations. Only our porch light signaled to the neighborhood children we were aware it was Halloween and it was safe to ring the bell.

Last year at the tender age of one (and a bit) Kiddo was barely starting to walk. A few people asked if we were going to take him out trick-or-treating. I tried not to snort too loudly when I told them no. There was about an hour between the time kids started showing up at the door and bedtime. We did bring him to the door to see the kids. He wore a perplexed expression in response to our show of excitement each time the door opened. He also wore the same Toys 'R Us pumpkin costume as, I' pretty sure, every other one year old in town. There was still no pumpkin on the front step.

Around Thanksgiving (which was a week ago in Canada) fall decorations started to appear around the neighborhood, including pumpkins. Kiddo started pointing to every pumpkin he saw and exclaiming, "pumpkin pie!"

Whether he's confused about the proper terminology for the vegetable, or he actually understands that these orange orbs are the source of a tasty dessert, I'm not sure. If he knows pie can be made from pumpkins it certainly isn't because he learned it at home. I did make pumpkin pie for Thanksgiving (or rather I made the filling while my mother made the crust) but the pumpkin involved came to the house in a can. Come to think of it, the last time he had or saw a pumpkin pie (to my knowledge) was last Thanksgiving. How he even knows the term is a mystery to me. As with most such mysteries, I assume the topic must have come up at day care.

Anyway, shortly after Thanksgiving, a giant blow-up jack-o-lantern appeared on one of the lawns visible from our front window. When Kiddo saw that, I knew my years of not decorating for Halloween were over. We went out and got pumpkins. Kiddo even helped me decorate them: 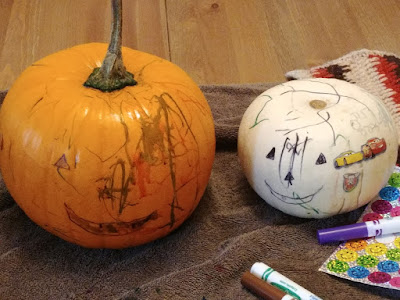 Most of this hard work will wash off the first time it rains. I did allow a couple of permanent Sharpies to start with (hence the towel) but it turns out Sharpies don't stick to pumpkin skin all that well, so I broke out the washable markers to expand our colour options. Can someone explain to me how a baby wipe cleaned the Sharpie off Kiddo's fingers better than it cleaned the 'Ultra-Clean Washable Markers' ??

We're also planning to make our first attempt at trick-or-treating this year. If we make it to the end of the street I'll consider it a wild success.

In other news, there was a wind warning in Kingston last night. I haven't  shopped at Winners recently, but someone in the neighborhood has: 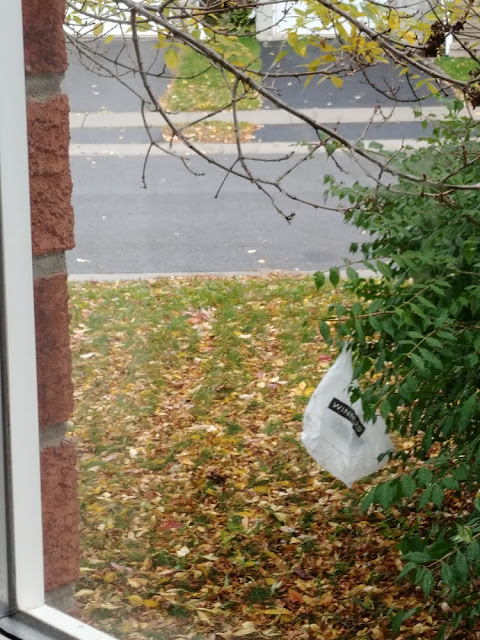