Stories That Stick: The Cremation of Sam McGee

There is not a lot of poetry on my home bookshelf. I do, however, have a copy of The Best of Robert Service, and I reread a number of the poems on a semi-regular basis. Many of Service’s poems are good examples of how poetry can be rich without being bewildering, and how a good story can be told in poetic form. In other words, his poems are fun to read and don’t leave me feeling like a literary moron. (Whether or not I am a literary moron is a debate for another day.)

In hindsight, cremation does seem an unlikely topic for a children’s book. On the other hand, I don’t recall being freaked out in the least. Goes to show, you can broach pretty much any topic with kids if you do it right.

How might one confuse the story of a Klondike prospector cremating his Tennessee-born, recently frozen to death friend with children’s literature?

We had a very good illustrated version. I’m pretty sure it was this one by Kids Can Press: 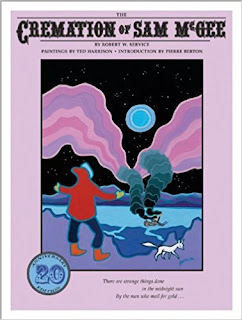 My clearest mental image is of Sam McGee smiling from the flames of the boiler in which he was cremated (with unanticipated results). Kudos to the illustrator, Ted Harrison; it didn’t look nearly as creepy as it sounds. And kudos to Kids Can Press for realising even a poem about death and cremation in the Klondike could be presented in a kid-friendly fashion.

Thanks to this early exposure to Robert Service, I’m a life-long fan. I also have a greater appreciation (which is to say, I have any appreciation at all) for poetry in general than I would, likely, have otherwise. (Note: My grade-ten English teacher also deserves some of the credit for that.)

Anyone else remember that Klondike Bar commercial from the 80s? It’s now stuck in my head. I will leave you with the question: What would you do for a Klondike Bar?
at November 04, 2017

Email ThisBlogThis!Share to TwitterShare to FacebookShare to Pinterest
Labels: Reading, Robert Service, Stories That Stick, The Cremation of Sam McGee