Friday the 13th–The Week After

Saturday: Kiddo broke out in mysterious hives. This is a first.

Saturday night: Kiddo woke up every forty minutes or so…all…night…long.

Sunday: We enjoyed a trip to the walk-in clinic. Poor Kiddo had a fever, ear infection, and swollen tonsils. Adding to the fun, our (slow) drive to and from the clinic was through a mess of sleet/freezing rain/snow.

Kiddo is now on a regimen of Amoxicillin, Tylenol, and Advil. Day six of ten and he’s resisting a little more each day. We have gone through a lot of Smarties this week, and ice cream too. If anyone out there can get a toddler to take that pink antibiotic goo without bribery, hats off to you.

The glorious snow/ice/rain combo persisted for three days. It’s weather like this that makes me wish I lived closer to the equator.

Thursday: I had an appointment scheduled for 11:00. I’m usually the person who plans an extra half an hour of fudge time, just in case, only to arrive super early for an appointment with a doctor who is running behind, and I end up spending an hour in the waiting room.

This time, I was the person who left the house with just enough time to drive the usual route, park in the usual place, and walk briskly from the car to the registration desk. So, of course, (for the first time ever in all the times I’ve wanted to park there) the parking garage was full and I had to drive in a circle looking for a spot on the car-packed street.

At 10:55, I was tripping over the snowbank next to my car. I narrowly missed a bystander before jogging down the street. Mercifully, there was no lineup at the registration desk. I made it to the doctor’s waiting area on the fifth floor at 11:05.

They didn’t call my name until 11:30. I guess I could have skipped the jog, but I needed the cardio anyway. Oh yeah, and it started snowing again.

I always have such high hopes for April, and April always sucks. Somehow, every year, I convince myself (usually around mid-February) that warm and sunny weather will come in April. And it usually does—for about a week. Then we get hammered by more winter.

This is not a new phenomenon. I can remember studying for university exams while outside in a t-shirt, then walking through snow three days later to write those exams. I have one, very clear, April exam-time memory of a friend cranking It’s Beginning to Look a lot Like Christmas through the dorm halls the day after a snow storm. Some people laughed, but most responses were more like: ɟµƆʞ^ɲ&*^%*ƨoɲɵɟaƂ*ƾ¢#*^@*$ƕµƾt#e ɟ*©ƙµp...which, if memory serves, only encouraged him to turn up the volume.

Still, I keep getting my hopes up and April keeps kicking my ass. Going through some pictures and videos from last year, I found one of Kiddo and me at the park around the end of April in t-shirts. Then I found another of him in his winter jacket with flurries in the air dated May 8th.

I'll never forget my first full summer in Kingston (many years ago). It was over 30℃ by May 2nd and it stayed that way through September. I wonder if that will ever happen again.

Four months of 30+ is a little too much heat for me, but I’d love to put the winter jackets away by May 1st with confidence they won’t be coming out again for five or six months. Is a month of sweater-only weather, after the snow and ice but before the searing heat sets in, too much to ask?

So, it wasn’t the best post-Friday-the-13th week ever, but luck is all in what you focus on. Thus, I'll leave this with a few notes on the bright side:

Kiddo made it past the 2 ½ year mark before needing antibiotics for the first time;

Despite avoiding it for a long time, I still remember how to parallel park (with moderate jockeying);

My mom texted me this nice flower picture around the time I was catching my breath in the waiting room: 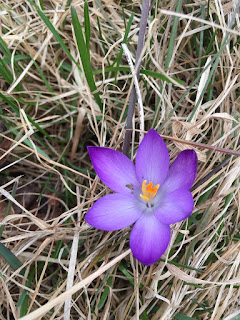 And finally, the sleet, rain, and snow are gone. It’s 10℃ and sunny this weekend. Maybe Spring is here and planning to stay for the long haul? That’s what I’m telling myself for now.