Everyone has their own idea about what makes for the perfect beer. Personally, I like a beer as cold as physically possible without being frozen. I would love to visit the UK one day, but I really cannot get behind the whole warm beer idea.

(Ok, technically I've been to London, but it doesn't really count. I never left the airport and didn't have a beer.)

To accomplish the perfectly-cold beer, I start by putting the glass in the freezer. Sometimes, especially if I'm dealing with recently-purchased, yet-to-be-refrigerated beer, the can/bottle goes in the freezer too. This is a delicate process. When carried out perfectly, the beer is a fraction of a degree above freezing and a light layer of slush forms on top as it's poured into the frozen glass.

If left in too long, the beer will freeze. Depending on to what extent the beer has frozen, this leads to ice chunks that make the pouring process impossible, and/or beer that explodes on opening. Historically, these were the only adverse outcomes in my personal experience.

It turns out there is a point on the spectrum between "thin layer of slush" and "too frozen to pour". It's called the beer slushy: 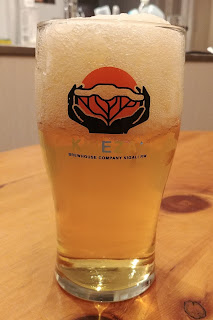 A picture taken one minute earlier would have depicted a glass entirely filled with still-expanding ice, and foamy slush spilling over the top. I didn't take that picture because I was busy trying to slurp the slush-foam as it escaped. My husband was kind enough to help, and we managed to prevent a major mess on the counter. If I'm ever hired to make a beer commercial I will attempt to recreate the effect. It looked awesome.